Big Bird snorts cocaine. Mr. Hooper uses his store as a front for stolen goods. Oscar the Grouch keeps pornography in his trash can. 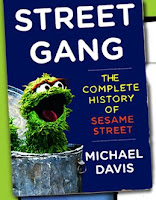 If these are the stories you are looking for, too bad. "Street Gang: The Complete History of Sesame Street" is not a Hollywood tell-all. No puppeteer hung himself by his own strings; Cookie Monster was not discovered on a casting couch. It is not even set in Hollywood. "Sesame Street" was inspired, imagined, sold and created out of the civil rights movement in New York City. And seemingly everyone involved with it was as altruistic and munificent as the theme song:

to where the air is sweet.

Can you tell me how to get,

how to get to Sesame Street?

Yes, we get a little past-tense womanizing, a lot of drinking and a psychotic breakdown later in the book, but it all seems sad, not salacious, and not germane to the basic story. "Street Gang" is journalist Michael Davis' tale of a woman, Joan Ganz Cooney, who had an idea at a dinner party and, despite plenty of opposition, fought her way to creating a show for preschoolers that would change television as we know it.

To read the rest of Diana Wagman's review of "Street Gang" by Michael Davis please click here.
Posted by CHertzog at 2:23 PM